Coffee Tradition and Consumption in Zagreb 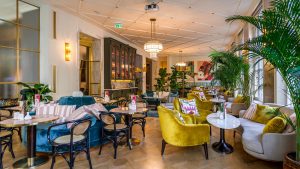 The tradition of coffee and coffee consumption in downtown Zagreb

Just like all Croatians, the people of Zagreb are great lovers of coffee and faithfully adhere to a culture of enjoying coffee with friends and family.

If you go through Zagreb’s centre, not just on a Saturday but on any day, you will see crowded terraces of smiling and cheerful people sharing their stories over their favourite hot beverage. You’ll witness Croatia’s popular social pastime of “Špica” (pronounced “Shpee-tza“) on Cvjetni Square and Tkalčićeva Street.

Espresso is most commonly served in Zagreb coffee shops. But Croats also love to experiment with coffee, so you will find variations of coffee served in large and small cups, with hot or cold milk, such as cappuccinos, lattes, cortados, piccolos, iced coffee, cold brew and also various filter coffees. Why not sample them all and find your favourite!

The Cafe – the heart of Hotel Capital

The Cafe at Hotel Capital is another must-visit coffee shop for lovers of coffee. Cafe Capital is the life force of the hotel and the most popular place to enjoy your favourite beverage, all day long.

As you enjoy the Cafe’s cosy ambience, stories and images of Zagreb’s iconic cafes spring to mind, having served as meeting places for residents, students, artists, public figures and politicians to socialise.

The first cafe in Zagreb was opened in 1756 by Valentinus Oro (Horro), and by the early 20th century there were 25 cafes in Zagreb that could rival those in Vienna or Paris.

Each coffee house had its own specific clientele and it was known exactly where you would find: military personnel; writers, musicians and bohemian types; the coffee house of choice for students; and likewise for actors and theatre staff.

Antun Gustav Matos, one of the greatest Croatian poets and frequent guest at the Corso coffee shop in Zagreb, is often referred to as having “… destroyed several coffee plantations and consumed several cellars of wine.”

One of his numerous memoirs of Zagreb from 1880 states:

“… Many smoke and drink coffee and stay quiet in their own wisdom like a Turk; others again discuss the latest political developments or attempt to resolve the city chronicles. Others still, ignoring these debates, sit by the crystal windows and watch everything that is outside on Jelacic Square, making sure their binoculars stay on the beautiful souls that pass by you in your day“.