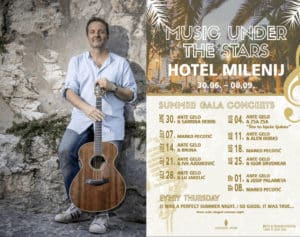 Come and relax with a glass of wine with a wonderful music program waiting for you on the terraces of the Millenij every Thursday from June to September.

Every Thursday, as part of the Gala Evening, Ante Gelo will perform together with renowned Croatian musicians. Over the years, Ante Gelo has performed on world-famous concert stages: L’Olympia in Paris with Oliver Dragojević and Teresa Kesovia, Royal Albert Hall in London, Wiener Konzerthaus in Vienna, Carnegie Hall in New York and Sydney Opera House with Oliver Dragojević. His performances certainly touch the soul, make the experience unforgettable and create unforgettable memories.