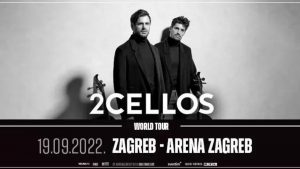 Spectacular and last concert of 2CELLOS in Croatia

ZAGREB WAS SELECTED AS THE LAST EUROPEAN CITY ON THE WORLD TOUR – SEPTEMBER 19th, 2022. – ARENA ZAGREB

After 10 years as 2CELLOS, released 6 studio albums, collected billions of streams, performed in cult places around the world and sold almost a million tickets for their energetic performances, the duet Luka Šulić and Stjepan Hauser announced their last performance in Zagreb as part of world tour and announced that 2022 is the last year in which they perform as 2CELLOS!

According to the decision of these virtuosos, Zagreb was in the last place of the European part of the tour, and with good reason. Namely, according to the words of the famous duo “That’s where we started, that’s where we want to end” Zagreb has become the last European destination where this planetarily popular duet will play together. It is also an opportunity for all fans from Croatia, but also from the surrounding area, to see and hear 2CELLOS live for the last time. And as they themselves stated, this tour will be charged with energy and emotions like no other so far.

Wheelchair users enter for free, but must reserve a seat by purchasing a free wheelchair ticket in the grandstands below. The escort pays the full price of the ticket.

Children up to the age of 6 enter free of charge (if they sit on the parent’s lap). If the child takes a seat, the ticket is paid at full price.

Find your tickets at the eventim.hr.