Day trip to Pula from Opatija 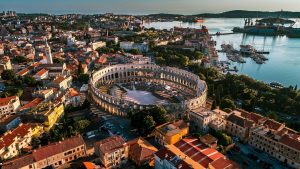 Previous Next
Explore Pula's ancient Roman architecture in a day. Only 1.5 hours from Opatija!

Pula (Istrian peninsula) – the colourful history of Pula stretches back to antiquity, but some of the best landmarks date back to the Roman period. The renowned Pula Arena (or Amphitheatre) is the sixth-largest surviving Roman amphitheatre and one of the best preserved. Built in 1 AD, the same time as Rome’s Colosseum, the Arena is said to have held over 20,000 spectators for gladiator battles. Today it holds up to 5,000 people for open air concerts.

The nearby Forum ‘main square’ served classical and medieval Pula, still the administrative centre to this day as the site of the 13th century Communal Palace, right beside the Temple of Augustus. It is believed the former city walls featured 10 entry gates, the Twin Gates being two such surviving structures.

The Gate of Hercules served as the entrance to the upper city street and the Golden Gate (Triumphal Arch of the Sergi), just inside the former city walls, is an ancient family memorial.

Other structures of interest – all within walking distance – include the Venetian Pula Castle on the hilltop above the Small Roman Theatre and a well-preserved, 3rd century Roman mosaic floor depicting the Punishment of Dirce, to name just a couple.