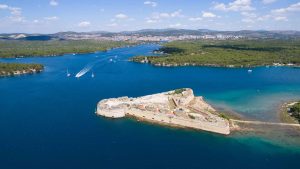 Previous Next
One of Šibenik's four historic fortresses, now a UNESCO-heritage family member.

Recently added to the UNESCO Heritage cultural hall of fame list, St Nicholas was built in the 16th century as part of the Venetian line of defence against the Ottomans. Named after the Benedictine Monastery that previously occupied the islet Ljuljevac at Šibenik’s sea entrance of St Anthony’s Channel, it was fitted with 32 cannons.

One of the best preserved  fortresses in Dalmatia, and although never under attack it was in non-stop use as a defence structure until 1979. Aerial views show a triangular, arrowhead-shaped fortress, which can be reached by foot from Zablaće. It can also be viewed from Jadrija, on the opposite side of the channel.

Currently it is currently reachable only via boat from the Šibenik riva (waterfront).

More Things to Do in Šibenik