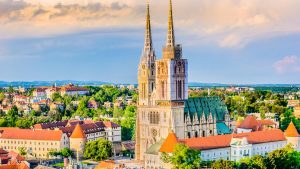 Previous Next
Ban Jelačić Square is the largest square and most famous landmark in Zagreb.

Set in the pulsing heart of the city centre, Ban Jelačić Square is the largest square and most famous landmark in Zagreb.

The time-tested people’s meeting place; cafes and restaurants fill the well-preserved 19th-century buildings lining the square, and the area is well-suited to the favourite Croatian pastime of ‘špica’ (people-watching and being seen). It is also a venue for cultural events, concerts and large social gatherings.

Established in the 17th century as the main marketplace and centre of commerce, it was first known as Harmica. It was renamed as Ban Jelačić Square in 1848, after Croatian military strategist and politician Ban Josip Jelačić (‘ban’ means viceroy), 11 years before his death. Shortly afterwards, the renowned statue of him mounted on his horse in full military gear was installed in his honour.

Located at the bottom of the two Upper Town hilltop settlements of Kaptol and Gradec – united under Jelačić’s leadership – Ban Jelačić Square borders with the Lower Town.

More Things to Do