Day trip to Trogir from Šibenik 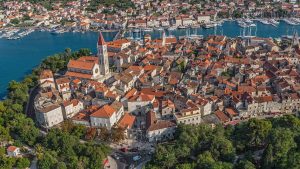 Previous Next
Explore the UNESCO town of Trogir in a day. Only an hour from Šibenik!

Trogir – 2,300 years worth of exquisite, well-preserved historical Romanesque, Gothic, Baroque and Renaissance architecture and artwork in this UNESCO Heritage town, influenced by the ancient Greeks, Romans and Venetians.

The 13th century structures are particularly significant, especially the St Lawrence Cathedral (considered one of the best architectural examples in Croatia) with the Radovan Portal (its elaborate staircase entry), Dalmatian sculpted lions with Adam and Eve, and the 15th century cherub bapistry.

More landmarks all within walking distance on this peninsula, include the Trogir Town Hall, a 15th century noble family’s Grand Cipiko Palace, Kamerlengo Castle and Marmont’s Gloriette (built for Napoleon’s general Marmont who left his mark in Dalmatia during his five-year appointment as military and civil governor, 1805-1810).