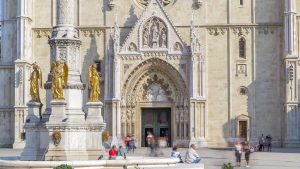 Located in Kaptol district just above Ban Jelačić Square, the Cathedral of the Assumption of the Blessed Virgin Mary is Zagreb‘s most defining landmark and Croatia’s tallest building thanks to its 108-metre spires. Featured on the back of the Croatian 1,000 kuna note, the Cathedral’s ornate, mid-13th century Gothic and late-19th century Neo-Gothic reconstructive architecture is the most important example of sacral architecture in south-east Europe.

An old clock out front keeps the time at exactly 7.03 – the very time that the 1880 earthquake struck Zagreb, damaging part of the Cathedral and responsible for the partial reconstruction. Its 6,000-pipe organ is classified as one of the top 10 finest in the world. The heaviest carved gargoyle weighs around 1,500 kg while the largest of the eight church bells weighs a huge almost 6,500 kg.

Currently undergoing a renovation, it is planned that the 40-metre viewing deck, last open in the 1950s, will reopen together with access to the 85 metre viewpoints in the two towers. Pope John Paul II conducted the Holy Mass at the Zagreb Cathedral in celebration of the 900th anniversary of the Archdiocese of Zagreb.

More Things to Do in Zagreb

Zagreb – a City of Museums